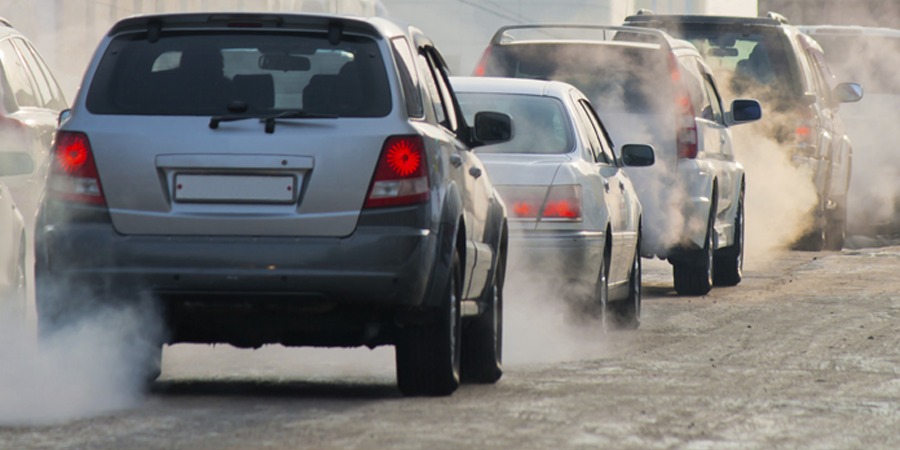 In recent years concern about exhaust emissions from motor vehicles has been increasing. To combat this, the motor industry has been promoting the diesel Vehicle as cleaner than petrol Vehicle, due to their greater fuel economy and reduced maintenance requirements. However, diesel vehicles have very different emission characteristics, and an increase in diesel vehicles at the expense of petrol vehicles could have important implications on urban air quality, smog formation, global warming and other environmental issues. Recently there has been much debate about which fuel, diesel or petrol, is the cleanest in terms of exhaust emissions. Unfortunately there is no clear answer due to the lack of measurements of emissions from both types of fuel. Presently use of CNG as a motor vehicle fuel in Pakistan especially at Karachi is also increasing, which should be measure with respect to enhance ambient air quality.

On a cycle representing congested urban traffic, both LPG and CNG outperform petrol powered vehicles on emissions of carbon monoxide (CO). Indeed, emissions of CO from CNG powered vehicles are of the same order as those emitted by diesel vehicles. However, emissions of total hydrocarbons (THC) from CNG vehicles are relatively high because of methane, the major component of natural gas. Although methane is a small contributor to the formation of low level ozone it is a major factor in global warming. Emissions of NOx and particulates from both LPG and CNG powered vehicles are significantly lower than those from diesel vehicles. Moreover, emissions of NOx from CNG vehicles are half those from equivalent petrol-engine vehicles. A recent study using a small delivery van fitted with a three way catalyst and capable of switching between CNG and petrol, showed that on a modified EU emission test cycle, emissions of CO, non-methane hydrocarbons (NMHC) and NOx were 76%, 88% and 83% respectively lower with CNG than with petrol. Using data from other studies CNG also compares favorably with emissions from equivalent sized diesel-engine vehicles.

Hydrocarbon emissions result when fuel molecules in the engine do not burn or burn only partially. Hydrocarbons react in the presence of nitrogen oxides and sunlight to form ground-level ozone, a major component of smog. Ozone irritates the eyes, damages the lungs, and aggravates respiratory problems. It is our most widespread and intractable urban air pollution problem. A number of exhaust hydrocarbons are also toxic, with the potential to cause cancer.

Carbon monoxide (CO) is a product of incomplete combustion and occurs when carbon in the fuel is partially oxidized rather than fully oxidized to carbon dioxide (CO ). Carbon monoxide reduces the flow of oxygen in the bloodstream and is particularly dangerous to persons with heart disease.

In recent years, the U.S. Environmental Protection Agency (EPA) has started to view carbon dioxide, a product of “perfect” combustion, as a pollution concern. Carbon dioxide does not directly impair human health, but it is a “greenhouse gas” that traps the earth’s heat and contributes to the potential for global warming.

Gasoline evaporation increases as the temperature rises during the day, heating the fuel tank and venting gasoline vapors.

The hot engine and exhaust system can vaporize gasoline when the car is running.

The engine remains hot for a period of time after the car is turned off, and gasoline evaporation continues when the car is parked.

Gasoline vapors are always present in fuel tanks. These vapors are forced out when the tank is filled with liquid fuel.Vehicle Noise Measurements ( ISO 5130 )
The noise from vehicles such as cars, buses and trucks is wide spread with many people being affected by these noise sources in their daily lives. All modern vehicles will be designed to meet strict safety and emissions standards as well as noise output levels.

All vehicles sold in the EU must comply with a range of noise directives to ensure that they meet these specified noise levels when they are sold and many countries enforce regular checks over the life of the vehicle.

Motor Sport noise is a often a source of enjoyment for those taking part and for spectators. The impact of motorsport activities on the surrounding environment is also of major concern to many people who live near to venues as well as to those operating the circuits, tracks and venues.

ISO 5130:2007 is a measurement standard that describes the method for testing the noise from the exhaust of vehicles. This is a commonly used standard that is employed to ensure that car, trucks and any other types of road vehicles comply with their specified noise outputs levels.

ISO 5130:2007 requires three consecutive measurements to ensure repeatability. These measurements are taken at a specified engine speed, or RPM, and the maximum sound level produced during the test is taken. Once three valid measurements have been made, the highest is taken and used as the valid result.

The microphone can be placed at the specified measurement position, typically 45 degrees and 0.5 m from the exhaust of the vehicle under test.

Smoke opacity instruments measure optical properties of diesel smoke, providing an indirect way of measuring of diesel particulate emissions. There are two groups of instruments: opacity meters, which evaluate smoke in the exhaust gas, and smoke number meters, which optically evaluate soot collected on paper filters. Correlations have been developed to estimate PM mass emissions based on opacity measurement. Second generation opacity meters based on laser light scattering are much more sensitive and appear to hold promise for application to newer engines with much lower particulate emissions.

Smoke and smoke opacity meters are instruments measuring the optical properties of diesel exhaust. These instruments have been designed to quantify the visible black smoke emission utilizing such physical phenomena as the extinction of a light beam by scattering and absorption. In general, smoke and opacity meters are much simpler (some of them very simple) and less costly in comparison to most other instruments used for PM measurement. They are often used to evaluate smoke emissions in locations outside the laboratory, such as in maintenance shops or in the field. In fact, the smoke opacity measurement is the only relatively low-cost and widely available method to measure a PM-related emission parameter in the field. For this reason, opacity limits are used in most inspection and maintenance (I & M) or periodic technical inspection (PTI) programs for diesel engines. Smoke opacity limits may be also included as auxiliary limits in new engine emission standards.

We provide services for measuring the lowest soot concentrations and gravimetric measurements for compliance testing. Along with the currently limited emission components, more and more substances are also measured. These include, for example, nitrogen compounds such as NO, NO2, NH3, N2O, HNCO or aldehyde compounds such as formaldehyde and acetaldehyde.

Considering the rising number of measurement parameters as well as the devices and subsystems to be used, the requirements for the operators and for the automation systems are increasing across the board. Nevertheless, the demand for an increase in productivity also has to be met. Aims Tec has optimally prepared its emission measurement technology for these challenges.

EPA has adopted emission standards for all types of On-road Vehicles such as Cars & Light Trucks, heavy Trucks, Buses & Engines, Motor cycles and Non-road vehicles or equipment. Non-road diesel engines are used in machines that perform a wide range of important jobs. These include excavators, industrial trucks, mobile cranes and other construction machinery, farm tractors and other agricultural equipment, heavy fork lifts, bulldozers, airport ground service equipment, and utility equipment such as generators, pumps, and compressors, garden equipment, such as hedge trimmers and hand-held chainsaws. Furthermore brief about Non-road equipment view chart as shown below: 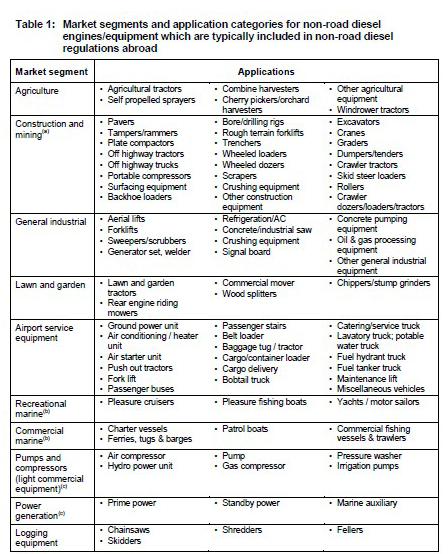 Marine vessels contribute a significant portion of total pollutant gas and particulate matter emissions near ports and waterways across the Pakistan coastline. As such, International Convention for the Prevention of Pollution from Ships, United States Federal, and California Air Resources Board emissions regulations dictate engine exhaust emission limits on CO, NOx, Total Hydrocarbons (THC), and Particulate Matter (PM) with SOx controlled via fuel sulfur content limits. These regulations also dictate a tiered schedule of increasingly stringent emissions limits be met in the future.

It has been estimated that there is in excess of circa 53,000 vessels internationally trading in the global merchant shipping fleet, with less than 20% of that number contributing more than 70% of the total fleet tonnage.

The fleet is made up of various vessel types:

All of these ships will have diesel engines of one sort or another, even the very small number of vessels that have turbine driven power plant. Virtually all ships use liquid fossil fuels as the main energy source.

Aims Tec Emission Laboratory was created to assist and address the emission reduction needs of the marine industry due to regulatory requirements as per local and international standards.

Emission Testing for Commercial Aircraft Engines Aircraft engines produce emissions that are similar to other emissions resulting from fossil fuel combustion. However, aircraft emissions are unusual in that a significant proportion is emitted at altitude. These emissions give rise to important environmental concerns regarding their global impact and their effect on local air quality at ground level.

For many of us sound is an everyday part of our daily lives.

To measure sound, a logarithmic scale is used with the decibel (dB) as the unit of measure. The sound level of typical daytime urban-based activities can vary between 40dB and 85dB. The typical aircraft noise levels are between 65dB and 95dB.

The following are examples of noise levels from everyday activity: 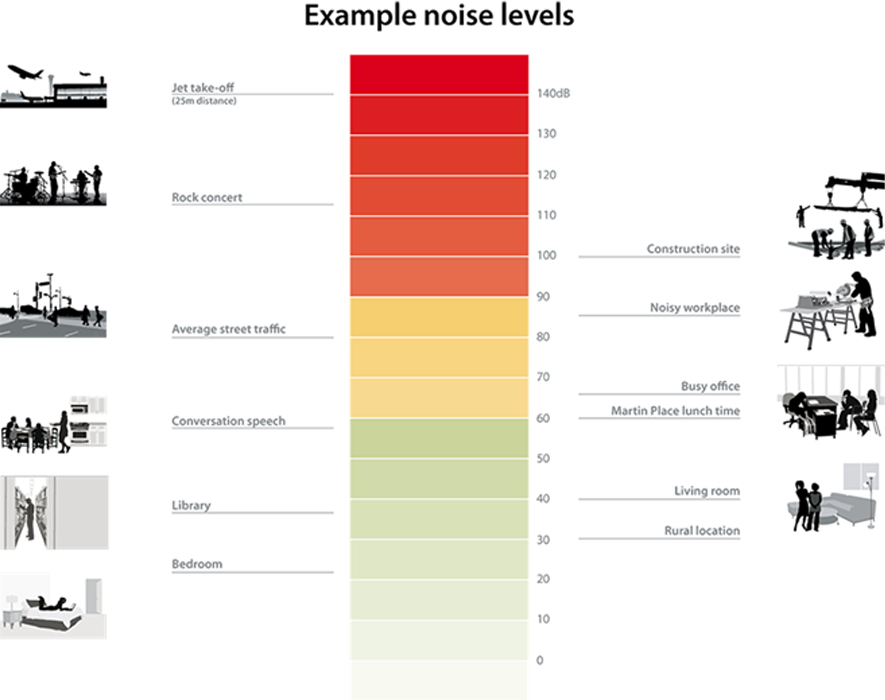 Aviation Noise is by far the most emotive topic around airport expansion, where battle lines are drawn in the form of noise contours, and entrenched positions on Government policy and residents’ rights to peace and quiet have resulted in a stalemate.